CAMERA AND ELECTRICAL | CINEMATOGRAPHER
After graduating from New York Film Academy Australia’s Diploma of Screen and Media with a special focus on the Filmmaking program, Leroy Button landed a job at Panavision. He has worked as a camera operator, 1st AC, and editor at XM2 PURSUIT.

Button’s work centers around his proficiency in state-of-the-art drone cinematography. With experience behind the camera on films such as Aquaman and Dora: The Lost City of Gold, Leroy has also worked for television, exploring his talent in cinematography with the TV mini-series Roommate Wanted for the End of the World. His more recent credits include his behind-the-scenes work on Fast & Furious 9, season 3 of Westworld, and Mission: Impossible 7. 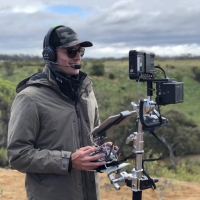